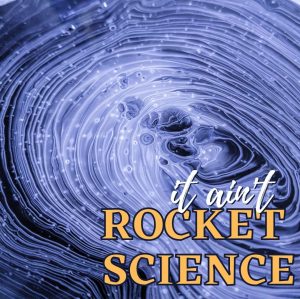 We humans can make life hard when we want to. And that happens pretty regularly. There are some basic laws of nature and even laws of life. If it goes up, it’s gotta come down. The law of cause and effect says if you do this, you’ll get that.

Same in life, but we always want to defy laws and hope against hope that the law won’t affect us…and only us, because we already know it’s affected others. Hmmm.

It ain’t rocket science, but we make it harder than it should be. Here are a few examples.

If you don’t start, you won’t ever get where you’re going. It’s always that first step, isn’t it? But it seems safe if you don’t take the first step. I mean, if you stay in the land of familiar and don’t venture out into the unknown, you won’t get lost, and you won’t get off track?

It ain’t rocket science: Time to put away all the excuses and become laser-focused on moving forward. Just take the step. You can always correct, but if you don’t take action, you’re just stuck.

Spend less than you make. This is a basic tenet of building a solid financial foundation, whether your personal or business finances. It also would work for the federal government, but let’s don’t get off-track here. If you determine to spend less than you make, you’ll have more time to try to make more. Spending money you don’t have opens up endless rabbit trails, leaks in the dam and assures you’ll spend most of your time chasing rabbits and plugging the leaks.

It ain’t rocket science: Get on a budget. You’ll be ahead of most Americans because over 70% do not budget. Don’t have a clue how to budget? Take the first step and email us. We can help.

Ask not, have not. The Bible says in James 4:2 that you don’t have (favor, friends, money, peace) because you don’t ask God for it. Now, there’s another part of that scripture to be sure, and it’s essential, but be bold and ask. What’s the worst that can happen?

It ain’t rocket science. What do you need? Wisdom? Help with a project? A ride to the store? A friend who will listen? Put aside the fear and pride, be transparent and ask God, your family or friends.

You’ll reap what you sow. Doesn’t matter what it is. This is one of those guaranteed laws. We sow, then pray nothing grows. Prepare for the harvest. It’s coming. You plant tomatoes, you’ll get tomatoes. You sow strife or jealousy; you’ll get strife or jealousy. Hosea 8:7 says: “For they sow the wind, and they shall reap the whirlwind.”

Here are some things that will cause you to stay stuck or get in your own way.

Fear. Most of us experience anxiety at some point, and some choose to live in that camp. Others push through to find what they’re seeking on the other side…of fear, that is. How long will you live in Camp Fear?

Stubbornness. Yep, we all have stubborn streaks. They show up in different places and come out in various situations, but they are there. You can stand your ground, but what are you protecting?

Pride. This is an ugly one but prides build a roadblock that boxes you in. Suck it up and eat the frog or choose to stay in the rut.

Excuses. We all have a list a mile long? What will they think? What if I fail? I don’t have the money, time, resources. But…what if you don’t fail? What if they cheer you on? What if the money comes after you take the first step? It’s all about perspective. After all, Benjamin Franklin said: “He that is good for making excuses is seldom good for anything else.”

What’s holding you back? It’s probably not as complex as you make it. Stop getting ready to get ready because it comes down to recognizing that fear is a liar, your excuses are cheating you out of victory and pride, and stubbornness are making sure you stay in the rut.

What are you going to do about it? It ain’t rocket science.