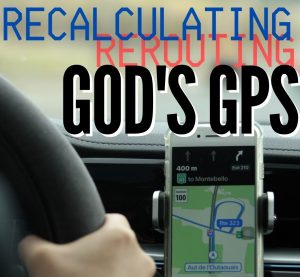 We’ve all missed that turn, and our GPS reacts with the infamous — sometimes infuriating — REROUTING or RECALCULATING. Ugh!

Yes, it’s frustrating, and your blood pressure jumps along with your anxiety level, if only for a moment. But it all turns out okay, generally, doesn’t it? Your MAPS or Mapquest has it together and gets you to your destination. Maybe not on schedule due to the missed turn(s) and maybe a few side streets you hadn’t intended to take. But you get where you’re going, all the same, right?

The GPS is single-minded. It doesn’t mind that you missed the turn. Its only goal is to get you where you are going. Time isn’t a factor, the goal is never lost, and the number of turns, alleys or back streets is not a consideration.

Question: If your GPS can recalculate or reroute your journey and still get you to where you’re going, don’t you think God can do the same? But even better?

God has a plan for your life. Have you made a wrong turn, okay, a few wrong turns? Have you gone down the wrong road and had to turn around? Did you make a decision or two that didn’t turn out well? Did you get stuck at a dead-end for what seemed like an eternity?

God is the ultimate Rerouter, the One who has recalculated time and time again. He’s not a novice, and His goals or plans for you have not changed. The plan is still the plan, and the goal is still the goal that God designed before you were born.

So, don’t you think God can recalculate all those wrong decisions and wrong turns? Yes, you! Life can be downright frustrating, and we can be miles from the goal, but God is still working in the heavenlies on your behalf. And He still has a goal for you. Take a look at God’s GPS and start fresh. Don’t be complacent and don’t be satisfied at the dead-end or on the wrong road.

Recalculating or rerouting is not the end. Enjoy the ride, but keep going.